Fighting Bigotry With The Power Of ‘Aloha’

The freedom of every individual to follow the spiritual path of our choice or to follow no religion at all. This freedom is enshrined in our constitution, in our Bill of Rights, which every member of Congress takes an oath to protect. And which so many heroes have given their lives to defend.

As a soldier I served in the Middle East, where I experienced first hand not only the cost of war, but I came to understand the cause of the endless conflicts that persist today.

The cause of these endless conflicts lies in the ambitions of various religious sects to control the levers of government, and to dominate those who adhere to other religious beliefs.

Shia and Sunni Muslims are vying against each other to establish theocracies or caliphates led by their religious leaders.

The Shia theocratic dictatorship of Iran is supporting the cause of Shias, while the Sunni theocracies like Saudi Arabia and others in the Gulf States are backing the Sunni fighters and terrorists like ISIS and Al Qaeda.

In the meantime, Christians, Yazidis, Sufis, and other Muslim and non-Muslim minority religious groups face genocide.

People in the middle east, people everywhere, want peace. But unfortunately too many fail to recognize that that lasting peace can only be found with pluralistic secular government.

What is lacking in the world is “Aloha.” Now, Aloha is not just a word that means hello and goodbye. It’s a word with a deeper and far more powerful meaning. It’s a word that really means that you have a deep respect and love for others regardless of the color of our skin, where we come from, or the spiritual path that we may follow.

Whether we’re hindus, christians, atheists, buddhists, agnostic, or anything else, that we respect and love each other as brothers and sisters. This is the essence of Aloha.

When we have aloha for others, we will naturally come to respect that every individual has free will. And thus, the freedom to follow the spiritual path of our choice or no spiritual path at all. This recognition of our individual free will and our commitment to individual freedom is the essence of what it means to be an American. We must remember that this nation was founded by people fleeing religious persecution. Risking everything to find a place to be free to worship as they chose or not to worship at all. In the original articles of our constitution drafted by our founding fathers, Article 6 clearly states that quote no religious test shall ever be required as a qualification to any office or any public trust under the United States.

Each of us wants to be free. But if we want to be free we also need to appreciate that others also desire the same thing. If we don’t want others to trample on our individual free will, than we must be careful not to trample on the free will of others. The great Chinese sage Confucius once said “don’t do to others what you don’t want done to yourself.” Jesus Christ made the same point. “Do Unto others as you would have done unto you.” So if I don’t want someone else to force me to follow their spiritual path or non-spiritual path, then I too must not force them to follow the path I have chosen for myself. It is when a society fails to respect an individual’s freedom of choice that this society inevitably ends up in great darkness and suffering. And it’s unfortunate that there are billions of people around the world who live in such darkness. Who live in worlds where individual freedom of conscious and religion do not exist. Where people who are followers of the so called wrong religion or have no religion at all are treated as lesser human beings. Are discriminated against, oppressed, forced to pay extra taxes, forced from their homes or their lands, or, worse yet, raped or killed.

A pluralist secular government is the only way to ensure that all individuals have the freedom to follow the religious or non-religious path of our choice.

Recently in Bangladesh, a secular blogger named Nazimuddin Samad posted an article criticising organized religion. He was hacked to death by a crowd of men wielding machetes and yelling Allah Akbar. A Hindu temple in Northern Bangladesh was attacked with grenades and small arms fire. And the priest, Jogeshwar Roy had his throat slit. Police arrested three suspects tied to Islamist Jihadists. Just last month, Khurram Zaki, a prominent Pakistani journalist and human rights activists was gunned down by the Taliban while dining at a Karachi restaurant. Why? Because he was one of many Muslims courageously advocating for a pluralistic, tolerant secular, Pakistan. We must stand with such freedom loving Muslims and followers of all other religious and atheists who are committed to pluralism and individual free choice. These brave souls are calling for a pluralistic society built on religious freedom and are fighting a desperate battle against extremists who are financially supported by theocracies like Saudi Arabia and Iran. We must stand with those in Bangladesh and other parts of the world who are building coalitions of Christians and Buddhists and Hindus, atheists, secularists, risking their lives to advocate for pluralism and secularism. Furthermore, we must recognize that here at home our own nation is not immune to religious bigotry. As we stand here at the foot of the lincoln memorial, we can remember how Abraham Lincoln was attacked with accusations that he was not a christian. When John F. Kennedy ran for president his political opponents tried to foment religious bigotry based on his catholicism. When Barack Obama ran for President in 2007 people accused him of being muslim as though that might somehow disqualify him from being president. When Mitt Romney ran for president, there were direct attacks against his Mormon religion. When I first ran for Congress in 2012 my Republican opponent said in a CNN interview that I should not be allowed to serve in Congress because my religion quote does not align with the Constitutional foundation of the U.S. government. Just last year, Missouri State auditor Tom Schweich committed suicide after political opponents launched a malicious anti-semitic whisper campaign against him saying he was jewish. 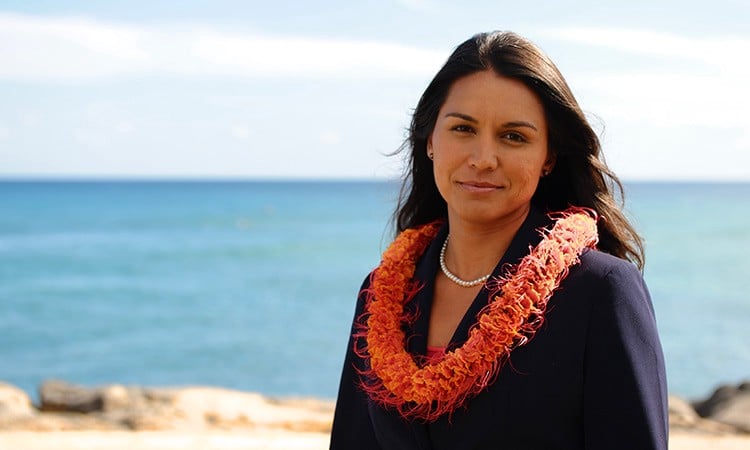 The message that we see in each of these situation is simple. That you will be punished politically for being of the so called wrong religion. There is nothing more un-American than this.

We have a great challenge that lies before us. Let us stand proudly as Americans. As defenders of our constitution. As defenders of freedom. Let us be inspired by the vision put forward by our nation’s founders, and challenge those fomenting religious bigotry to do the same. Rather than pour fuel on the fire of darkness, divisiveness, and hatred, let us bring the light found in the aloha spirit. Respect and love for everyone, irrespective of religion, race, gender, any of the external differences, to our lives, our families, our country, and the world. Let us be inspired by the likes of Muhammed Ali, Mahatma Gandhi, Martin Luther King, as we join hands working toward the day when every young American, whether they are Hindu, Buddhist, Sikh, Christian, Jew, Muslim, Humanist or Atheist, can live without fear. With the inalienable rights of life, liberty, and the pursuit of happiness that our forefathers envisioned for all of us. Let us confront hatred with love. Confront bigotry with Aloha. Confront fear with truth. Let us truly live Aloha in our actions, in our words, and in our hearts.

Thank you very much. Aloha.