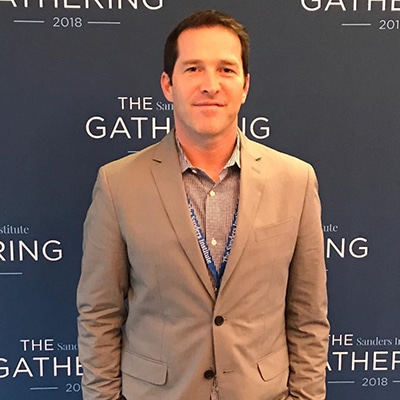 David Driscoll is Co-Founder and Executive Director of the Sanders Institute, the Vermont-based progressive think tank that seeks to revitalize democracy by actively engaging individuals, organizations and the media in the pursuit of progressive solutions to economic, environmental, racial and social justice issues.

David’s leadership at the Sanders Institute, along with co-founder and fellow Dr. Jane O’Meara Sanders, has established the organization as an educational arm of the progressive movement.

A native Vermonter, David has been involved in politics and government from a young age: inspired by his mother, O’Meara Sanders, and father, two-time presidential candidate Senator Bernie Sanders. During the 2016 U.S. Presidential Election, David directed the Arts and Culture team for Senator Sanders, forming The Art Of A Political Revolution and leading Artists for Bernie Sanders.

A former executive and brand marketing expert with over fifteen years of experience in the private sector, David previously held global positions with Nike and Burton. His global roles included a talent for identifying and securing many of the world’s top athletes, and preparing them for the world stage during international competitions. He has worked on a number of marketing campaigns, producing impactful and inspirational youth-focused sports and entertainment content. This work would go on to shape the careers of top talent and athletes, including many current and future Olympians; and provide the next generation of sports and entertainment enthusiasts with positive role models.